Presented annually by the Public Relations Society of the Philippines (PRSP), the Anvil Awards is recognized as the premier award-giving body in the communications industry that symbolizes excellence in public relations.

Prestone’s Anak ng Mekaniko Scholarship program emerged as one of the recipients of the coveted award under the PR Programs Targeted at Specific Stakeholders category.

In line with its 90th Anniversary, Prestone initiated the nationwide search aimed at choosing nine students, who deserve a chance at receiving a tertiary education through the Anak ng Mekaniko Scholarship program.

“Prestone designed this program to help local auto mechanics not just by providing them with top-of-the-line products to use for their livelihood, but more importantly, could ease the financial burden of sending their children to school,” said Paolo Lao sales and marketing director of Clorox Southeast Asia.

The program also shines a light on the fundamental human right to a good education regardless of one’s age, gender or status. It puts into focus the lengths to which parents would go to give their children a better life. 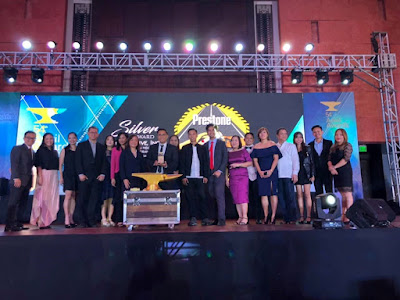 The scholarship program did not require the nine selected scholars to enroll in automotive technology or a similar vocational course. Instead, it was set up to provide a free college education for any degree that they want to have.

Receiving the award during the Anvil Awards’ Gabi ng Parangal were Prestone executives, together with Kieth Bryan Perez, one of the recipients of the scholarship grant, and his parents, as well as representatives from Prestone’s communication and activation partners Themeactive, Inc. and PRC, Inc.