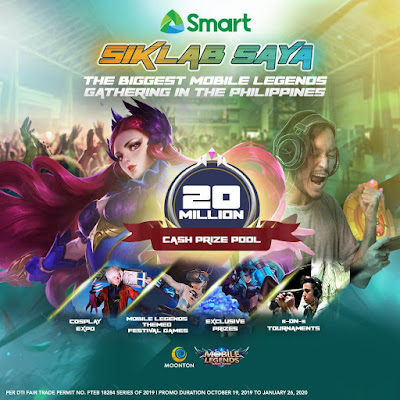 Mobile Legends fans in the Philippines

[November 20, 2019] Get ready for the most epic Mobile Legends event in the Philippines as Smart is powering Siklab Saya, a nationwide gathering and tournament for Mobile Legends: Bang Bang from November 2019 to January 2020. Covering at least eight key venues nationwide, Siklab Saya is shaping up to be the biggest ML gathering in the country, bringing the game closer to Filipino fans.

With Php20 million worth of prizes up for grabs, thousands of Mobile Legends fans are expected to troop to Siklab Saya venues and celebrate the mobile arena game, test their skills with other aspiring pros, and compete for exciting prizes.

As a nationwide convention for all ML fans, Siklab Saya features different activities and booths for ML fans! To participate, Smart subscribers simply have to register to a Giga Games package and answer a Mobile Legends Hero quiz. Once done, subscribers may enter the Siklab Saya event and get a chance to win cool prizes!

Completing all of these activities earn subscribers an exclusive skin among other prizes!

Of course, no Mobile Legends event is complete without a chance to watch skilled players duke it out in high-stakes games. As such, Siklab Saya features a tournament with all aspiring Mobile Legends pros. Here’s how it will go:

So if you and your squad think you’ve got what it takes to be some of the best Mobile Legends players in the Philippines, sharpen those skills and sign up starting November 23!

Siklab Saya is powered by the awesome GIGAfied gaming experience only Smart Giga Games provides. With Smart Giga Games 99, subscribers get 2GB open-access data and 1GB of Games All Day for nonstop Mobile Legends and other top mobile games valid for seven days! Simply dial *123# to Gigafy your love for gaming today!

Smart lets you Gigafy your passions in life with affordable Giga promos powered by the country’s undisputed fastest LTE network, as certified by third-party organizations such as Ookla, Opensignal, Tutela, and P3 in their respective crowd-source-based studies on mobile internet services in the Philippines.

Shopee Launches the Shopee Bayanihan: Frontliners Package to Support Frontliners Amidst the Pandemic