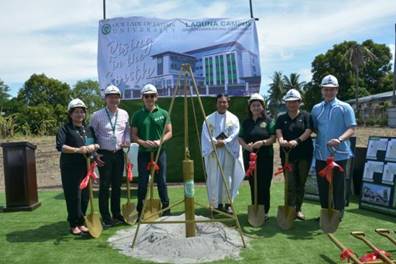 OLFU enters another milestone after 50 years of quality education

Our Lady of Fatima University (OLFU) takes its first foray to the south following 50 years of providing quality education in and around Metro Manila as well as Central Luzon with the groundbreaking of a sixth campus set to rise in Santa Rosa, Laguna.

“When we open a campus, the first and foremost that we have in mind are the students coming in,” said Don August O. Santos, Executive Vice President and Chief Financial Officer of OLFU. “With any person who goes through Fatima, and graduates with a degree from Fatima, there’s a sense of achievement that we were able to mold that person to the best that he or she could be.”

The new campus is set on a spacious four-hectare property in Macabling and will initially house a five-story building complete with school facilities and amenities for holistic student learning. Like in OLFU’s other locations, the Laguna campus will offer business courses together with the university’s trademark healthcare programs to meet the demands of the Santa Rosa community.

“We’ll offer both medical and business programs so we are able to address current needs. If there’s a strong calling for business programs, we’ll include them in our offerings,” OLFU President Dr. Caroline Marian S. Enriquez said. “Because we are known for our medical programs, we’ll include those as well. We’re delivering the best for each program.”

A nod to heritage, this milestone reflects a return to the humble beginnings of one of OLFU’s founders, Professor Jose Olivares. In 1967, Professor Olivares founded a 25-bed general hospital in Valenzuela City to convince his son-in-law, Dr. Vicente Santos, to cancel migration plans to the United States. Soon the hospital grew to a nursing training center in 1973 and then to a medical college in 1979. Further expansion led to a second campus as well as a more diversified academic program in the 1990s. In 2002, Our Lady of Fatima College was granted university status by the Commission on Higher Education.

“It’s like coming full circle. When we were kids, we would go to the Olivares ancestral house in Santa Cruz, Laguna, and we would always pass along this path (the new campus site),” Santos said. Santos and Dr. Enriquez are among Professor Olivares’ seven grandchildren who are part of the university leadership.

“We thought it would be a good idea to come back to where we came from. Our roots are from Laguna,” Dr. Enriquez explained regarding why the university chose Santa Rosa for its latest campus.