MICHAEL WEATHERLY’S CHARACTER DR. BULL IS BACK WITH A BRAND NEW SEASON

Dr. Jason Bull seems to have gone through a change of heart after S2 cliffhanger 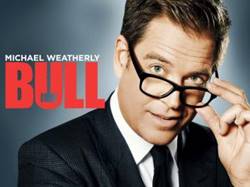 Brash and brilliant Dr. Jason Bull (Michael Weatherly) not only comes back alive after suffering from a massive heart attack on the Season 2 finale. He’s also looking like a whole new man as he goes straight back to work and ready for another bout of courtroom voir dire in the third season of Bull on Blue Ant Entertainment.

Towards the end of the last season, Dr. Bull fell into a downward spiral—drinking, overeating, missing out on sleep, and occasionally throwing out tantrums that would sour the confidence of the Trial Analysis Corporation team.

The new season, however, opens with a sleeker-looking man, without the unkempt hair, unshaven face, and the pounds around his waist and under his chin—signs of change from someone who only thinks about himself. Unfortunately, he returns to work facing a rather rich client, an insurance company being sued by a dying mother who was denied coverage for a liver transplant. Will the snarky Dr. Bull manage to choose the right thing not just for himself but also for his team?

It’s a decision that could make or break his return after almost losing the team’s confidence in the previous season due to his self-destructive decisions, especially when he found out that his ex-wife was remarrying. TAC’s second-in-command Marissa Morgan (Geneva Carr) couldn’t help but confront him: “I think you’re an amazing person, Jason, but I am tired of worrying about you, pitying you. I want to admire you again.”

He then tried patching things up—by taking on a risky death penalty case involving a mute man accused of rape, murder, and arson. The team didn’t share his enthusiasm and thought that he was being too impulsive when he took the case. No matter what they said, he trusted his guts—the way he had always done to do what was right for his team and clients.

Dr. Bull stood by his instincts and persuaded the team that there was hope not only for the case, but also for him to make things right again. In the end, they managed to uncover the tracks of the real perpetrator and prove their client’s innocence— not without a heavy toll on him that left viewers with bated breath.

Now Bull is back and in much better health—and more importantly, with more sensitive feelings. Could it be because he came face to face with his mortality? The entire TAC team is certainly happy seeing their boss back in business, but whether he’s become a changed man is another story.

Viewers will have to wait and see if Dr. Bull returns with a kinder disposition when he is enlisted by a big insurance company for a controversial case. The new season also puts the trial science expert Dr. Bull in the jury seat, serving his civic duty while working on a case to defend a woman accused of killing her daughter’s murderer in the next case.