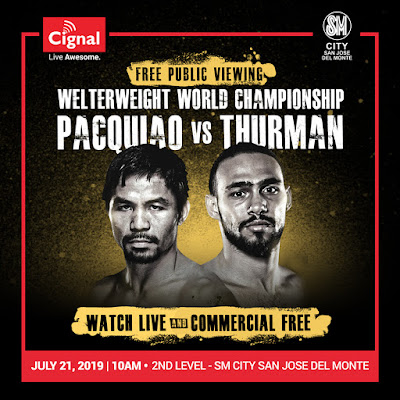 SAN JOSE DEL MONTE CITY, Bulacan – SM will treat its customers and mall goers for a free livestreaming of the most exciting boxing match of the year, the Welterweight World Championship Pacquiao vs. Thurman, live and commercial free on July 21, 2019, 10:00AM at SM City San Jose del Monte.

Sports and boxing fans will get a rare chance to do shopping, dining, grocery and watch a boxing match all in a day as the boxing’s only eight-division World Champion and Filipino Pride Manny Paquiao meet fellow Welterweight World Champ Keith Thurman for the WBA (super) welterweight championship.

On the record, the 40-year old boxing senator has 61 wins – 39 coming via knockouts, 7 losses, and 2 draws for a total of 70 fights, currently weights 147 lbs, a 5’5 ½ tall with a reach of 67” aims to make the biggest fights possible to entertain his large fan base as he continues his Hall of Fame career.

On the other hand, the unbeaten 30-year old Keith Thurman has a total of 30 fights – 22 knockouts and 1 NC or no contest, currently weighs 147 lbs, a 5’7 ½ tall with a reach of 69” will defend his WBA (Super) welterweight title for a claim to the top spot in one of boxing’s deepest and most talented divisions.