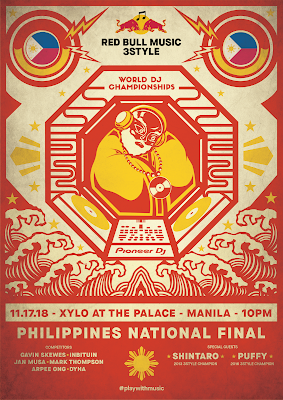 MANILA, Philippines – Red Bull Music 3Style is back in the Philippines for its fifth year as a nationwide tournament. The National Finals brings five (5) of the country’s top DJ’s to battle it out for a spot in the World Finals at Xylo at the Palace, in Bonifacio Global City, Taguig, on Saturday, November 17th, 2018.

The six (6) DJ’s who advanced to the Red Bull Music 3Style Philippine National Finals are:

This year’s selection of judges include a number of the most influential names in the DJ scene.

For almost ten years, Red Bull Music 3Style has established itself as a premier global event. This year’s tournament brings DJs from 20 countries to go head-to-head at the World Finals in Taiwan to become the 2018 World Champion.