4 reasons to switch to induction stove 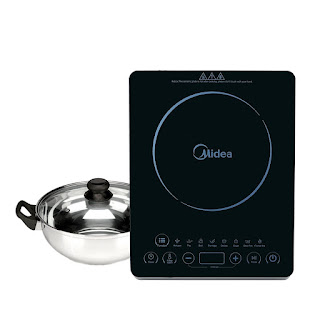 Many households are now switching to induction cooker because of their sleek design and promise of a smokeless heating method. But there is more to induction stoves than these two attractive qualities. If you’re curious and want to find out why many have shifted, Midea, the world’s largest manufacturer of home appliances, shares these important advantages:

1.More precise control. One of the biggest benefits of induction stove is that it provides more temperature range and better performance at very low heat settings. For example, Midea’s 1600W (P2,232) Induction Cooker or the Midea 2100W Glass Touch Induction Cooker (P2,995) feature eight stage power settings with six cooking functions, which means you won’t need to gauge the right temperature for frying, boiling, or steaming because it will do the work for you. Moreover, the heat control feature means that the temperature remain consistent throughout cooking time and cooking results are repeatable if you use the same settings.

2. It’s energy efficient. In gas and electric ranges, energy is converted to heat then directed to the pots and pans, so it takes longer to cook or heat food. Whereas for induction stove, the energy is directly supplied to the cookware, which makes cooking time faster. This ultimately translates to savings in energy and cost.

3. It’s easier to clean. Since induction stove emit little heat, food that spills onto the stove does not burn. So even with a splatter of oil or spilled sauce from food, it can easily be cleaned up by wiping the surface with cloth or sponge. Midea’s 1600W Induction Cooker and Midea 2100W Glass Touch Induction Cooker (P2,995) feature a hardened glass and scratch-proof surface, reducing chances of wear and tear from use over the years. Plus, it’s portable with a four-hour timer so you can bring it for outdoor dining with family or friends.

4. It’s safer. Because induction stoves do not produce flames, the chances of grease fires or gas leaks are close to none. Induction stoves immediately shut off when the cookware is removed, reducing chances of accidentally leaving it on or getting burned when you’re done cooking. Midea’s 1600W Induction Cooker and the Midea 2100W Glass Touch Induction Cooker (P2,995) are also safe around kids because of its 4D Splash Proof Protection, and Auto Safety Shut Off feature.

So, if you’re looking for a cooking method that’s safer, and saves time and energy, Midea’s 1600W Induction Cooker or the Midea 2100W Glass Touch Induction Cooker (P2,995) is your best bet!

Are you #DesignedToBePowerful? Here’s your chance to prove it at the OPPO Game On Cup 2022