Ayala Foundation, the social development arm of the Ayala Group of Companies, continues its commitment to rekindling Filipino pride through its new National Anthem video. The video launch was held on Aug. 26, National Heroes Day, in the historic city of Manila.

“Ayala Foundation remains strongly committed to nation-building. This new National Anthem video is our way of honoring the people and communities whom we continue to serve in both modest and big ways. We are all under one flag—united as one Filipino country, one Filipino people who desire a better future for our children and better lives for all,” said Ruel Maranan, president of Ayala Foundation.

The new video features everyday Filipino heroes, those who work hard for themselves, their families, and the country day-to-day while, at the same time, showcasing the country’s accelerated growth and prosperity.

Volunteers from Ayala companies likewise appeared in the video, showcasing their kagitingan and demonstrating Ayala’s commitment to building the nation. They were joined by volunteers from Ayala’s partner communities and institutions.

“As Ayala celebrates its 185th anniversary, we would like to highlight the spirit of collaboration, partnership, and volunteerism that is embedded in Ayala’s corporate culture. This new National Anthem video is just one way for us to show how Ayala’s 45,000-strong workforce is committed to serving the nation,” said John Philip Orbeta, group head for corporate resources at Ayala Corporation. 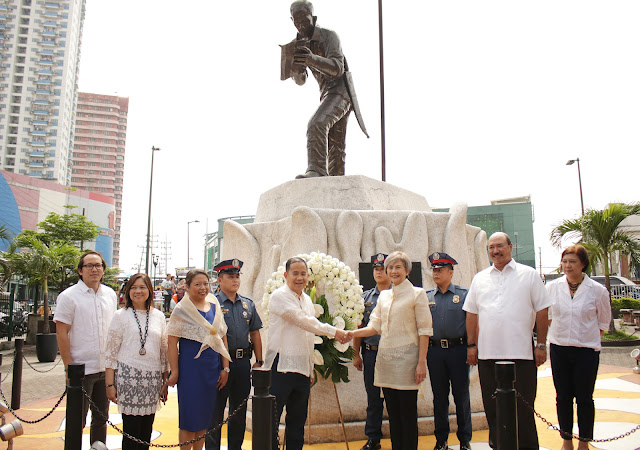 The new National Anthem video adheres to the Ayala Foundation’s ongoing Maging Magiting campaign, which promotes love of country and recognizing the extraordinary virtues of ordinary Filipinos. It was developed and produced by Ayala Foundation, with the support of the National Historical Commission of the Philippines, and will be shown in all Ayala Cinemas starting September 2019. Officers and representatives from Ayala Corporation, Ayala Land, Ayala Cinemas, the NHCP, and the City Government of Manila joined the Ayala Foundation during the launch.

The event ended with a wreath-laying activity at the foot of the Andres Bonifacio monument at the Tutuban Center grounds.