Derek Ramsay to Play for the Batangas City-Tanduay Athletics 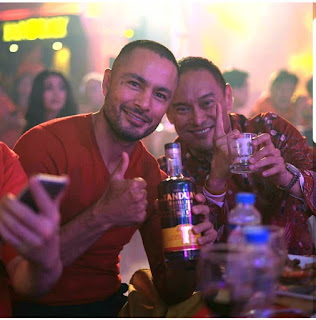 This is not the first time for the television and movie personality to play basketball, as he was previously with Kettle Korn team in the now defunct Philippine Basketball League. Ramsay has also excelled in the sports of ultimate frisbee and beach football.

As an actor and host, he has appeared in numerous TV and film productions in three of the country’s top media networks. He recently signed a contract with GMA-7.

“Derek is not only a good actor, but a good basketball player as well. We are happy to have him on our team,” Batangas City-Tanduay Athletics team manager and Absolut Distillers, Inc. COO Gerry Tee said.

Ramsay has been an endorser of Tanduay since 2014. The talented actor and host has helped the World’s Number One Rum further expand its market in the Philippines and the global market.

Tee said that Ramsay will see action with in the opening game of the MPBL at the Mall of Asia Arena this June 12. He will also play in their Dubai game in September.

“I love the game of basketball. Joining Team Tanduay is an honor. I always considered myself an athlete before an actor. I know there will be haters and people who will doubt me, but that’s okay. This is a challenge that I’ve decided to take on. I hope to help the team in any possible way I can,” Ramsay said.

The Batangas City-Tanduay Athletics was crowned the inaugural champions of the fastest-growing regional amateur basketball league in the country. They reached the South Division Finals in the Datu Cup before falling to eventual runner-up Davao Occidental Tigers.

“Derek will surely add more excitement in our games. With him on board, fans can expect an even stronger Batangas City-Tanduay Athletics team,” Tee said.