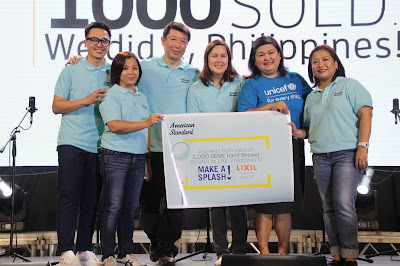 Last Dec. 15, 2018, a history-making event had four countries in Asia simultaneously holding the SHOWER FOR GOOD benefit sale- racing against the clock to sell 1000 American Standard GENIE hand showers in Manila, Philippines, Mumbai, India, Jakarta, Indonesia and Bangkok, Thailand. But who really won when the regional event reached its satisfying conclusion are the disadvantaged children of the world who no longer have to live without clean water and basic sanitation.

100% of all sales proceeds of Shower for Good will fund the projects of partners LIXIL and UNICEF through its foundation, MAKE A SPLASH, that will change the lives of these children for good.

In Manila, the benefit sale was spurred by the spirit of sharing that pervades the country during the Christmas holidays. As the 1000th Genie hand shower was sold, fireworks greeted a delighted Eastwood Mall Open Park crowd of mall-goers and the invited press who have enjoyed a stirring chorale fest that had 9 top choirs from the country serenading them that afternoon and into the early evening. With the help of student volunteers from various universities, Manila delivered 1000 American Standard GENIE hand showers sold. Joining Manila were Bangkok and Jakarta who also sold 1000 Genies each, while Mumbai brought in 448 units sold. 100% of all sales proceeds were turned over to the attending UNICEF representative in each country. In Manila, the ceremonial turnover was led by Alpha Ang, LIXIL Asia Pacific General Manager, Alen Alban, LIXIL Phils. Country Manager, Joralyn Ong, LIXIL Associate Director- Retail Sales and Trade Marketing, Emily Rose Besavilla, Marketing Manager of LIXIL, Liza Rachel Cancino, Marketing Director, Branding and Communications for Asia for Inax and American Standard, to Marga Uy Baula, Corporate Fundraising Officer of Unicef Philippines.

As Alpha Ang reiterated during the turnover of donation, ” by 2021, LIXIL-UNICEF “Make a Splash” would have helped 250 million people live healthier, better lives with clean water and basic sanitation.” With so much good done that Saturday of December 15, 2018, he announced to all that he is confident that that goal is entirely reachable.