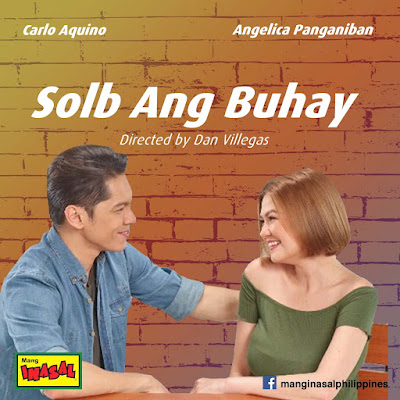 In the three-minute digital short, Mang Inasal and its creative agency DDB Philippines wanted to capture a very contemporary view on romance and relationships – in a way that only Villegas and “CarGel” can deliver spot on.

Dubbed #SolbAngBuhay, the CarGel video ushers viewers to the affectionate relationship between the characters portrayed by Carlo and Angelica. Both are happy and fulfilled by being together and are completely “solb” (fully satisfied) with the life they share.

The first half of the video showcases the engaging chemistry of the couple as portrayed by CarGel, including their most kilig moments – playfully washing the dishes, texting sweet messages to each other, and sharing their love for Mang Inasal Chicken Inasal. Their characters express what they think about each other, and how one cannot live without the other.

The popular song, “Sana,” of folk artist, I Belong to the Zoo, complements the digital film’s romantic narrative, specially as the couple is shown having a misunderstanding, with Carlo trying his best to comfort a crying Angelica. They part ways, in tears. This is followed by a montage of the characters doing their favorite things by themselves. The twist at the end lays the truth that the two are no longer together.

But even with a tinge of sadness, the couple still manage to be happy. As the two are shown eating in a Mang Inasal store by their lonesome, a loving moment that they used to share together, they seem to be contented eating alone by themselves.

This is where Mang Inasal’s self-assuring message that “one can still be happy regardless of one’s relationship status.” In reality, relationships end even between two people who seem to be perfect for each other.  And when it does, the important thing is to know that life does not end there. People will eventually be okay, and that it is okay to be single, that it is okay to love yourself.

“The film feels very real, as everyone does experience heartbreak once in a while. It’s our post-Valentine treat to our customers and CarGel fans, where we want to show the other side of love, where you don’t have to be in a relationship with anybody to be happy. We want to tell everyone that there is such a thing called ‘self-love,’ and this is the most potent of all kinds of love. It inspires one to discover happiness within, against trying to find it in someone else,” said Mang Inasal Marketing Director Michael Dumaual.

The digital short is a reunion for Angelica, Carlo and Direk Dan, coming off from the highly successful romantic drama “Exes Baggage.”

During the 90s, Carlo and Angelica were child stars who made names for themselves for their superb acting and talent. They were paired in many television shows and films until they became real life lovers. The two eventually ended their relationship and went their separate ways, pursuing their own careers in showbiz. But Exes Baggage reignited the comeback of the CarGel loveteam. To date, many fans still root for the couple, who now star in ABS-CBN’s “Playhouse.”

With this digital film’s release last February 25, Dan Villegas continues his streak of tearjerkers like “Never Not Love You,” “All of You,” and “The Breakup Playlist.” Villegas was the award-winning force behind “Hintayan ng Langit” and highly successful TV drama series “On The Wings of Love” and “Till I Met You.”

AXA Philippines at the Jr. NBA tip-off event SENIORS GET FAB AND FIT AT SM MALLS IN BALIWAG AND PULILAN