Missed out on Realme 3? Get it at Shopee 4.4 Summer Bazaar

Shopee, the leading e-commerce platform in Southeast Asia and Taiwan, teams up with Realme Philippines to bring back the Realme 3 for a limited flash sale at 12 MN on April 4, the finale of Shopee 4.4 Summer Bazaar. The Realme 3 sold out in just two hours at its launch on Shopee on March 25, becoming the fastest-selling mid-range smartphone on the platform. 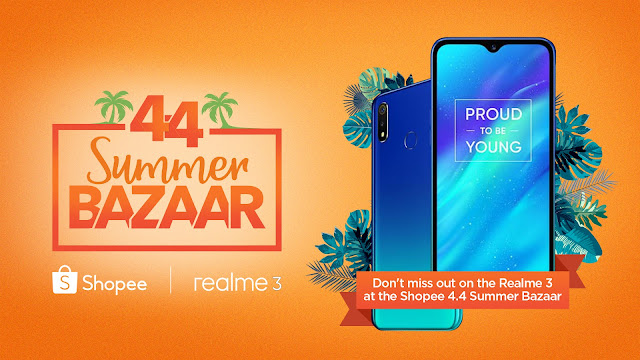 PIN IT
Martin Yu, Associate Director, Shopee Philippines said, “We are happy that the Realme 3 sold out on its launch on Shopee. Demand is still high and because we want to give our users the best online shopping experience, we are very excited to say that we will be partnering once again with Realme to bring the Realme 3 back for the 4.4. Summer Bazaar.”
Jacky Chen, COO, Realme Philippines said, “We are very happy that through our partnership with Shopee we have had two successful flash sales of the Realme 3. It even broke the record of the fastest selling smartphone under ₱10,000 on Shopee. To celebrate this achievement, we’re bringing back the Realme 3 to the Shopee 4.4 Summer Bazaar. We believe that with the support of our fans it will be as successful as the previous flash sales.”
At 12 MN on April 4, the Realme 3 in Radiant Blue will go on a two-hour flash sale for just ₱6490. Shopee users can enjoy a further 8% off with the code “gadgetzone8” upon check-out and get the Realme 3 for only ₱5970.
Visit the Realme official store at https://shopee.ph/realmeofficialstore.
For more information about Shopee 4.4 Summer Bazaar, visit http://shopee.ph/4-4.
Download the Shopee app for free via the App Store or Google Play

Airspeed Bridging the Gap Through M Lhuillier Branches Take charge, be an All-Star, and have a game plan with AXA