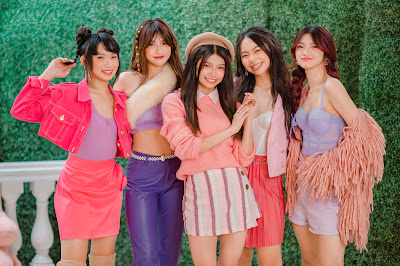 In their latest single, “Dalawa,” published by Sony Music Entertainment, P-Pop girl group KAIA takes a more R&B-leaning turn.The five-member act’s smooth groove stands out in stark contrast to their earlier works and relates to the idea of expressing affection in the most comforting, impressionable manner.

The diverse pop quintet says that “Dalawa is a song that conveys a story familiar to many: catching unrequited feelings for someone close to you.” “This specific material sticks to our strengths as a girl group, even though it deviates from the cheerful, dance-pop melodies that we’ve been giving out since our debut.”

Brimming with 2000s-indebted R&B melodies and whimsical beats, “Dalawa” embraces stylistic adventurousness with effortlessness that doesn’t overwhelm the vocals. The track is written and produced by Jayson Franz, who brings a mellow yet groovy direction to the Filipino group’s sound.

“I wanted a different approach for KAIA this time around, but I made sure to take into consideration their individual and collective personalities,” shares Franz. “I’ve added some string instruments and other sonic elements to help elevate the arrangements. But more importantly, the groove that I was trying to achieve was leaning towards Y2K R&B: simple, yet melodically interesting.”

According to Franz, KAIA was also heavily involved with the demo recording, making sure to relay their own inputs on vocal arrangements and the overall vibe of the song. “One of the memorable moments during the recording of the track was the first run of every member of KAIA,” adds Franz. “It was that moment when everyone knew that the song was really made for them. Each one of them has an own personality or taste in terms of the delivery of their lines.”

“Dalawa” by KAIA is currently available on all digital music services in the world thanks to Sony Music Entertainment.