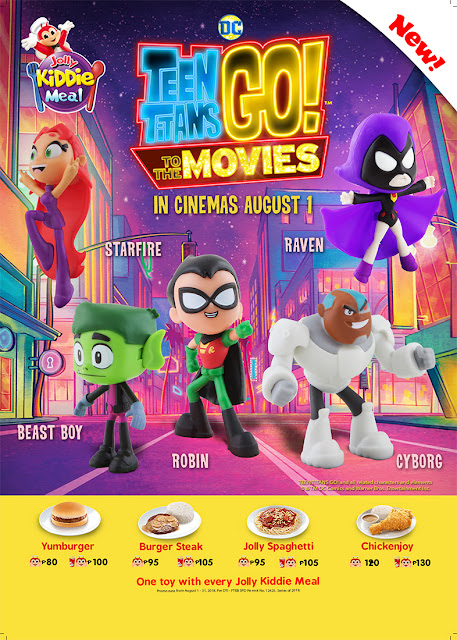 These cute collectibles of the entire superhero squad are just in time for the newly released animated film, Teen Titans Go! To the Movies.

Once sidekicks to better-known heroes, the Teen Titans have emerged as a young superhero team out to wage their own war against the forces of evil. Now, kids can enjoy an action-packed playtime of battling evil villains with cool toys that feature the heroes’ signature moves.

Get ready to shoot discs at enemies alongside Teen Titans leader, Robin. Just put Robin in position, insert the discs, and press the button to shoot.

Watch the shapeshifter, Beast Boy, transform into a pterodactyl by attaching his mask and wings. Afterwards, just press a button to flap his wings and take flight for battle.

Choose from Cyborg’s cool weapons which can be interchanged when assembled. Using a knob at the back, you can also move Cyborg’s arms to use his weapons at full force.

Cast mystical spells with Raven with just the switch of a button to make her eyes glow. Then, move the knob up and down to watch her levitate.

Jump off into outer space with Starfire with the press of a button and flip the switch to see her eyes glow as she releases powerful starbolts.

Get started on your superhero adventures with the Teen Titans Go! To the Movies, available from August 1 until August 31, 2018. Visit your nearest Jollibee branch to collect the whole team!