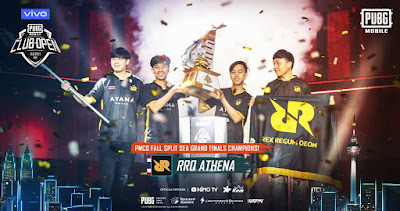 The PUBG Mobile Club Open (PMCO) 2019 SEA Championship has concluded with RRQ Athena claiming the championship and a US$35,000 prize, after collecting 211 points and achieving 3 chicken dinners in map Vikendi, Sanhok and Miramar.

The team will advance to the global finals along with runner-up, Illuminate The Murder. Mega Conqueror, Bigetron, and Orange.Esports.CG also obtained slots to the prelims.

The PMCO global finals will be held from November 29 to December 1 at Putra World Trade Center in Kuala Lumpur, Malaysia.

PMCO-SEA is authorized by Tencent and PUBG Corporation, with Vivo as title sponsor and the Vivo V17 Pro as the official device of the whole tournament.

The smartphone also has a Game Center which can quickly check phone performance to ensure an immersive gaming experience while a “Voice Changer” can inject more fun into game time with a variety of voices to match game characters.