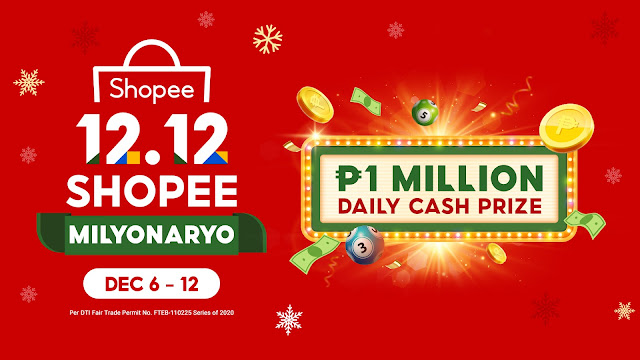 MANILA, December 9, 2020 – Shopee, the leading e-commerce platform in Southeast Asia and Taiwan, brings back the popular game Shopee Milyonaryo as part of its 12.12 Big Christmas Sale. Shopee Milyonaryo is an interactive lucky draw contest on GMA’s Wowowin, where Shopee users stand a chance to win up to ₱1,000,000 in cash.

From December 6 to 12, users can participate by logging on to the Shopee app and claiming their raffle code1. They get additional entries per draw when they purchase mobile load or data via the Shopee app. Each completed order qualifies as an additional entry. Users with the winning raffle codes will be announced daily during GMA’s Wowowin. During the show, contestants will play Pera O Kahon, during which they will guess which of the boxes contains ₱1,000,000 in cash.

Meanwhile, on December 12, a second daily winner also gets the chance to play Spin-A-Wil, where they will spin a prize roulette for a chance to win up to P300,000. The player will have 3 spin chances.

From December 7 to 12, users can play Guess the Box on the Shopee app, where they guess which box contains P1,000,000 for the daily Pera O Kahon game. Users who guess correctly get the chance to share a coin pool of up to P50,000.

Martin Yu, Director at Shopee Philippines, said, “Shopee is excited to announce this year’s second run of Shopee Milyonaryo. After the success of last month’s raffle, we want to continue spreading the Christmas joy to more Filipinos with 12.12 Shopee Milyonaryo. As the year draws to a close, Shopee remains committed to creating initiatives that engage and uplift our consumers.” 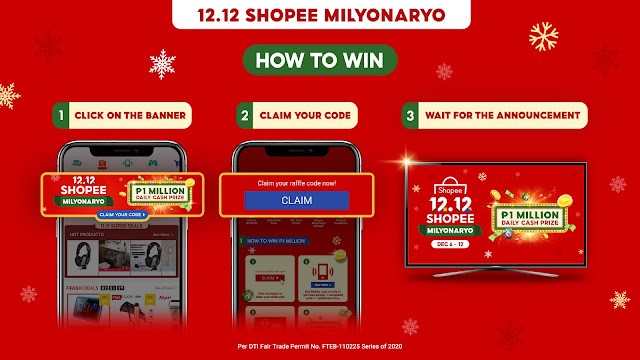 Until December 12, shoppers can expect prizes and big deals from leading brands.

More details about Shopee Milyonaryo are available on https://shopee.ph/m/shopee-milyonaryo.