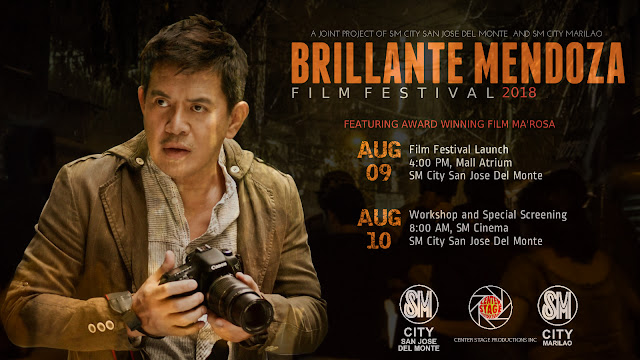 Dubbed as Brillante Film Festival, the event will feature one of Mendoza’s critically acclaimed indie films ‘Ma’ Rosa’ that reaped the Best Actress Award in 2016 Cannes Film Festival and a
nomination in Palme d’Or including the Best Director award during the 54 th Gijon International Film Festival in Spain. Students from various schools and universities as well as aspiring filmmakers and actors in Bulacan will have a rare opportunity to interact with the Director. Director Brillante Mendoza will give an in-depth view of Philippine Independent Film Making. His workshop will also include the never seen footages of indie film making that cover technical know-how and comprehensive aspects of indie film making that include direction, screenplay, cinematography, acting, production design, and sound and editing. Mendoza, who is known for his advocacies on tackling social issues, hopes to inspire workshop participants’ probing and critical thinking skills while improving their capacity in relating to social issues and appreciating the alternative art movement called “indie-film”.

The Brillante Mendoza Film Festival is a joint project of Centerstage Productions, SM Cinema, SM City San Jose Del Monte and SM City Marilao. It is also a part of Brillante Mendoza’s advocacy to rethink and redefine cinema by sharing his knowledge and experience in filmmaking with the new generation. Grand launch will be on August 9. This will be followed by Film Workshop on August 10 at SM City San Jose Del Monte.