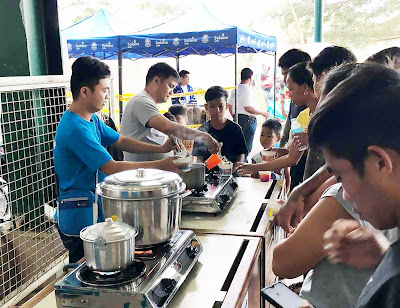 Hundreds of evacuees affected by the eruption of the Taal Volcano became beneficiaries of the relief operations organized recently by top LPG solutions provider Solane. Food, cooking equipment, and Solane LPG were generously provided to evacuees who were able to use the Solane LPG cooking stations set up by volunteers from the company.

“Solane is happy to be giving back to the community in any way we can. Through this tragic incident, we saw the opportunity to step up by setting up cooking stations so we can provide hot and freshly cooked meals to as many evacuees as we can,” said Isla LPG CEO Ruben Domingo.

Solane conducted a series of relief operations in various evacuation sites. At the Batangas Sports Complex, a team of Solane volunteers put up a cooking station to offer noodles and coffee to at least 3000 estimated evacuees. At the Batangas Provincial Capitol where more than 700 evacuees stayed, the Batangas Divers Association partnered with Solane to provide LPGs for their cooking station. Meanwhile, in Barangay San Jose, Batangas, Solane donated five sets of stove and LPGs to at least 900 evacuees.

The Taal relief operation is one of the several outreach initiatives of Solane in Batangas. Solane also regularly holds community drives such as barangay health initiatives, sports tournaments to promote a healthier lifestyle and good camaraderie, and Balik Eskwela to provide educational materials and school equipment to public schools.