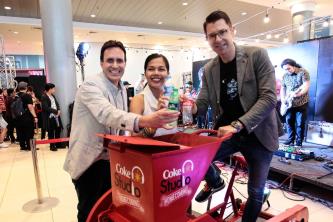 (From left) Coca-Cola ASEAN VP for Marketing Jose Luis Basauri, Coca-Cola Philippines Director of Public Affairs Jonah de Lumen-Pernia, and Vice President for Marketing Stephan Czypionka, try out the Coke Studio TuneCycle – a stationary bicycle that shreds PET bottles and other plastics to be used as ecobricks and pervious pavers.

For most people, waste recycling and creating music are simply two things that are worlds apart. But at the recent launch of Coke Studio Season 2 at the World Trade Center in Manila, these two ideas shared one stage to raise awareness about a growing plastic waste problem among the youth.

One of the highlights of the event was a live demonstration of the TuneCycle, a makeshift recyclable PET (polyethylene terephthalate) bottle grinder that is powered by a pedal mechanism – similar to those found in bicycles. The TuneCycle also has earphones for the user to listen to original Pilipino music (OPM) as they pedal away.

This is part of the global goal of The Coca-Cola Company of a World Without Waste. In January this year, Coca-Cola announced an ambitious goal to collect and recycle the equivalent of every bottle or can sold by year 2030. In the Philippines, one of the ways to reach this goal is to bring back PET bottles home through Coke Studio.

The Coca-Cola leadership team initiates action for the global World Without Waste mission with the Coke Studio TuneCycle.

“This is an interactive way of making the public, particularly the youth, more involved in recycling. It may be a small step, but it helps inculcate the act of recycling in their lives. As we at Coca-Cola continue to find solutions to realize a World Without Waste, every action, no matter how small, actually counts,” said Jonah de Lumen-Pernia, Director for Public Affairs and Communications of Coca-Cola Philippines.

As one of the avenues that bring Coca-Cola closer to the youth, music is also being tapped to make recycling more relevant to the younger market. As part of the Coke Studio caravan, the TuneCycle aims to amplify how each recyclable PET bottle can have another purpose after the consumption of its content. In the case of TuneCycle, the shredded recyclable PET bottles will become part of eco-bricks that will serve as pavers for a public school.

“Every action to breathe new life into recyclables matters. Every action brings us closer to realizing the vision of a World Without Waste. With the TuneCycle, we are able to inspire more people to find ways for recyclable PET bottles to come home and breathe second lives into them, instead of throwing them in dumpsites, or worst, ending up in our oceans,” said de Lumen-Pernia.

Watch out for future Coke Studio events and bring recyclable PET bottles to their home in Coca-Cola.