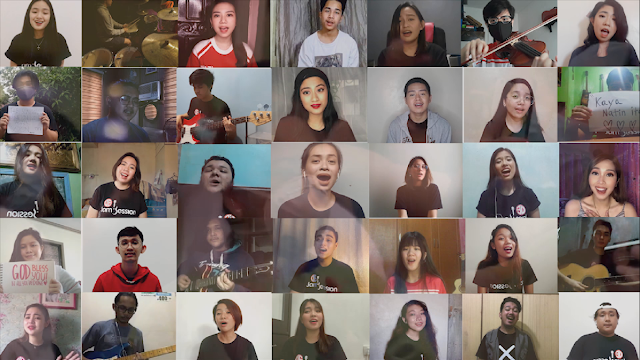 After reaching more than 120,000 views on Facebook in less than a month, UE Jam Sessions’ collaborative song “Lalaban Tayo” is finally available on digital and streaming platforms worldwide via MCA Music, Inc.

Recorded and filmed in the respective homes of participating members during the quarantine, “Lalaban Tayo” was written by Jenny Legaspi as a tribute to the unsung heroes of the pandemic era: the frontliners.

The song also tackles the invaluable dedication and unwavering efforts of the medical workers and volunteers in the thick of the battle against an invisible enemy.

To date, the music video has received acclaim form various media outlets in the country. Business Mirror’s Tony Maghirang praised songwriter Jenny Legaspi’s lyrics, taking note of how it “reflects that feeling of connection with the frontliners who risk their lives on the line for others day in, and day out.” The veteran music writer adds, “It’s the kind of perception that’s a vital shot in the arm. It should fortify every listener’s optimism that brighter days are just around the bend, nearer than what the statistics would make us believe.”

ABS-CBN News Online’s Jackie Dosmanos also commend “Lalaban Tayo” for giving people something to hope for. According to her, the song “came out fighting for its right to be a notch above the plethora of pandemic-related OPM this summer.”

“Lalaban Tayo” was written by Jenny Legaspi, arranged by Choi Felipe, and executive produced by Tommy Tanchanco. It features more than 30 participating singers and artists from the University of the East’s premier music organization.

Watch now! See how #TeamGalaxy DonBelle is doing awesome with their new Galaxy A Series devices