Xiaomi, Maybelline, and The SM Store Named The Most Popular Brands on Shopee Philippines in 2018 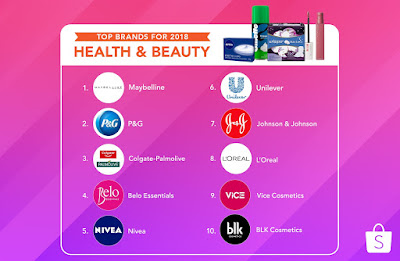 Building on the buzz of the new year, Shopee Philippines unveils the top categories and brands in 2018 ahead of the first Payday sale of 2019 from 10 to 18 January. Electronics, Health & Beauty, and Home & Living emerged as the top categories for 2018, with Xiaomi, Maybelline, and The SM Store topping the charts for each category.

Martin Yu, Associate Director, Shopee Philippines, said, “Shopee Philippines achieved many exciting milestones in 2018, including the launch of Shopee Mall which cemented our position as a one-stop online shopping destination and delivered increased convenience for users seeking a more diverse online shopping experience. Since its launch, Shopee Mall has seen tremendous growth due to strong support from both brands and shoppers in the Philippines. In 2019, we will continue to expand our assortment on Shopee Mall to give users even better deals from leading local and international brands and retailers.” 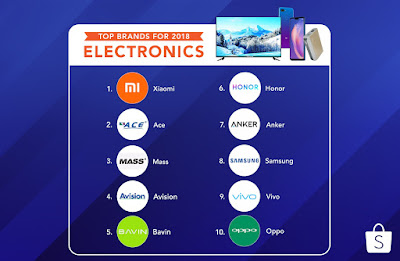 The electronics category recorded around 300% increase in orders in 2018, becoming one of the top 3 categories on Shopee Philippines as Filipinos shopped for tech products online more. Shopee catered to this trend by onboarding leading electronics brands on Shopee Mall and also launching Shopee Gadget Zone, a dedicated portal featuring Lowest Price Guaranteed deals on tech products from top brands including Xiaomi, Samsung, and Oppo.

In addition, televisions were also popular among Shopee users in 2018, as TV brands Ace, Mass, and Avision ranked among the top 5 electronics brands on Shopee Philippines. 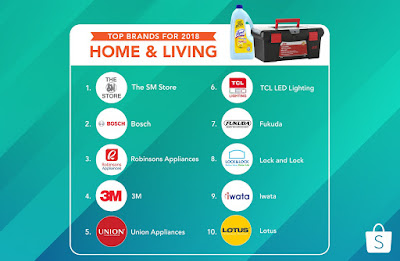 Home & Living was also among the hottest categories in Shopee Philippines in 2018. Bath and bedroom supplies were especially popular among Filipino users; on average, over 2,000 bath and bedroom-related products were sold every day. In line with the global trend of cutting down on plastic use, around 400 stainless steel straws were sold per day on Shopee Philippines in 2018.

The SM Store, the largest department store chain in the Philippines, was the number one brand in the Home & Living category in 2018. Insulated tumblers, oil diffusers, and hard case luggage bags were the hottest products on The SM Store as the brand saw robust performance over the year, ranking among the best-selling brands during Shopee 12.12 Big Christmas Sale.

In line with the growing popularity of online shopping among men, there was also an increase in demand for electrical appliances and power tools as TCL, Bosch, and Lotus ranked among the top 10 Home & Living brands.

Health & Beauty rounds off the top categories on Shopee Philippines in 2018 as Shopee users continued to snap up skincare products and cosmetics.

Maybelline emerged as the top beauty brand on Shopee Philippines after a fruitful Shopee 12.12 Birthday Sale, where it sold over 50,000 items on 12 December alone. Maybelline’s success was driven by several hit products launched in 2018, such as the Superstay Matte Liquid Lipstick, Hypercurl Mascara, and the Fit Me Liquid Foundation.

Shoppers can look forward to even better deals from their favorite brands on Shopee in 2019, starting with the first Payday Sale of the year from 10 to 18 January. Users can enjoy free shipping with a minimum spend of ₱150, up to 7 rounds of flash sales daily, and the return of the new interactive live quiz game Shopee Quiz after a strong debut during Shopee 12.12 Big Christmas Sale.