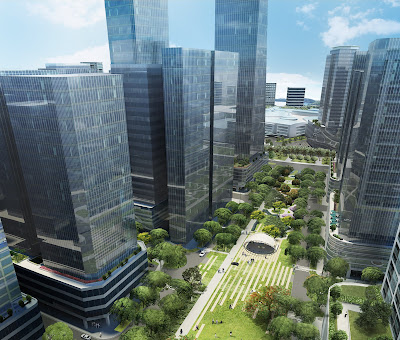 In the early 1990s, Andrew Gotianun Sr. saw there could be more to a grazing ground for livestock in Alabang. His company, Filinvest, won the bid over the 244-hectare Alabang stock farm and transformed it into his vision of a complete environment conducive to meeting the demands of global businesses and enriching the lives of those working and residing in the city. With that vision, the Filinvest City masterplan—one that is sustainable, future-ready and responsive to the needs of an ever-changing metropolis—was drawn up.

Today, the 244-hectare Filinvest City embodies the ideals Andrew Gotianun Sr. set years ago. Filinvest City is very much of the present and even as it looks forward to tomorrow, introducing key enhancements to its masterplan: green system, districting and improvements to “mega-blocks” resulting in a well-balanced live-work-play environment.

Filinvest City is currently registered to the United States Green Building Council’s (USGBC) Leadership in Energy and Environmental Design (LEED) certification—a first for the Philippines—under the Neighborhood Development plan, further proof of its commitment to build a truly progressive and sustainable CBD.

These include the Spectrum Linear Park, a recently-completed three-section linear park spanning almost a kilometer that dissects the city from north to south. It is a beautifully landscaped green spine along Spectrum Midway with tree-lined paths, lighted seating areas and stimulating outdoor art installations.

Also part of Phase 1 is the development of a creek side park, stretching further down from the Spectrum Linear Park to a creek, which features meandering paths with seating areas, a bridgeway, bike lanes and a viewing deck. When completed, this will be connected to the al fresco retail strip—the River Park at Festival Alabang.

Included in the pipeline of Phase 1 is the Central Park where a botanical garden, bike racks, a dome structure for events and an expansive lawn will be built. This is envisioned to be one of the major public event spaces within Filinvest City where people can either enjoy a picnic on the sprawling lawn or come together to celebrate an outdoor concert.

Filinvest City has also earmarked its megablocks—parcels of land that Filinvest is retaining that will add as the value enhancers in the city. Part of the masterplan is the maximization of Festival Alabang as the City Center with its major phase by phase expansion and the construction of a chapel near the River Park, the construction of a Convention Center which will be connected to the transport hub, and the Filinvest Axis Towers which will define the Filinvest City’s skyline.

Filinvest City’s design divides into districts, all bearing the four pillars of the City but each with its own distinct character: Northgate District which houses Northgate Cyberzone, the IT-BPO (information technology-business processing outsourcing) hub; the Civic Plaza that houses a variety of public services and institutional facilities like fire station and healthcare establishments; Westgate, the upscale retail and lifestyle center; the Woods, the more green campus-like and relaxed setting; the Palms District, the highest point and site of exclusive developments like Botanika Nature Residences; South Station, the transport hub; the City Center, where the Festival Alabang, the biggest regional mall, is located; and the Spectrum district as the economic core of Filinvest City and is home to prestigious businesses, as well as high net worth families and individuals. These areas are steadily being transformed into self-contained live-work-play districts.

Filinvest City takes a more prudent approach to city enhancements, proceeding at a steady and calculated pace. These developments bolster Filinvest City’s position as a world-class CBD, ultimately ensuring that land values in the area continue to rise and creating a community responsive to the needs of locators and the people living there today and tomorrow.