This group of mountaineers hiked for the world’s refugees. So can you

The Trail Adventours team raises the UNHCR flag as they reach Mt. Everest Base Camp. The 10 hikers from the Philippines dedicated their walk to the 2 Billion Kilometers to Safety campaign, to honor the resilience of refugees and forcibly displaced families around the world. (© Coby Sarreal)

Manila, Philippines – To climb Mount Everest is a dream aspired by many. To reach it is an accomplishment fulfilled by a few. This is how Trail Adventours described why 10 Filipinos joined the arduous journey to Everest Base Camp, a 12-day hike that would leave any hiker gasping for air. Even seasoned mountaineers are no exception to the thinning oxygen levels upon reaching the high altitude.

Brothers Coby and Guido Sarreal, co-founders of the hiking tour company Trail Adventours, have been climbing mountains for more than two decades now. They say they started trekking mountains for the love of the great outdoors. They have reached the Everest Base Camp in previous years, but for both, the trip last October was a little different.

This was because the all-Pinoy team they led in trekking the Everest Base Camp dedicated their hike to refugees, in support of 2 Billion Kilometers to Safety campaign of United Nations High Commissioner for Refugees (UNHCR), the UN Refugee Agency.

The campaign is a virtual movement that encourages supporters to step in solidarity with the world’s refugees. According to UNHCR, refugees around the world walk an estimated 2 billion kilometers every year to reach the first point of safety.

“We all have our grand thoughts about changing the world,” says Angie Tan-Sarreal of Trail Adventours. “Sometimes it’s recognizing how you can help, even if in the little ways.” 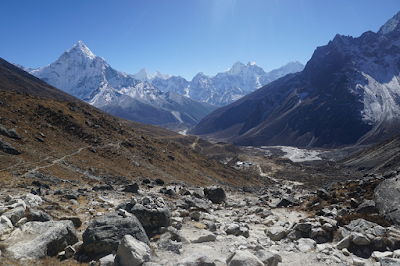 The journey to reach Mt. Everest’s Base Camp

As a staunch supporter of the movement, Trail Adventours is taking its commitment a notch higher by organizing a hike-for-a-cause on December 15. For only Php2,500, participants can join a beginner summit to sea adventure to Mt. Gulugod Baboy in Batangas with a side trip to Sombrero Island with the Trail Adventours team and help raise funds for forcibly displaced families around the world.

Citing how a simple hike can help impact lives: Angie shares, “Imagine if you put yourself in other people’s shoes when you have to walk because it will literally save your life. Just being able to reframe hikes a little differently makes you not take for granted the comfort you are enjoying. It makes you not take for granted the fact that you’re able hike a mountain freely, and not because you have to cross borders to get somewhere safe.”

The journey to reach Mt. Everest’s Base Camp took 12 days. Hikers from Trail Adventours dedicated this climb to refugees, some of whom walk over 100 kilometers for days to find the nearest point of safety after fleeing conflict, violence, and persecution. (© Coby Sarreal)