Solenn for Solane – the collab of the year is coming 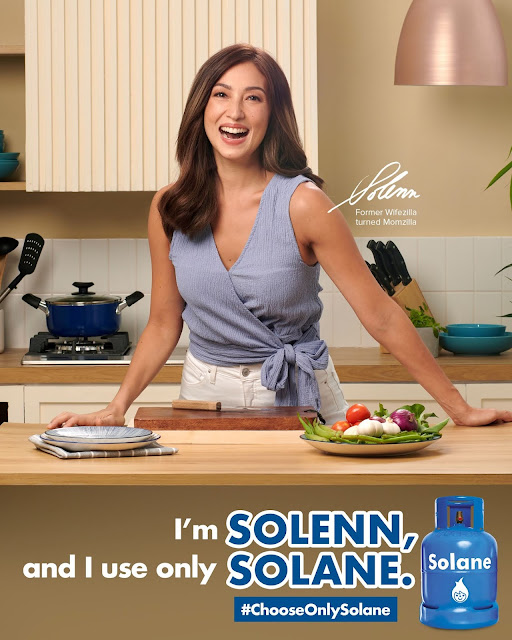 Solenn Heussaff has signed for a project that’s been a long time coming – becoming Solane LPG’s new brand ambassador. After signing a one-year contract set to start this June, Heussaff revealed that she had always wanted to represent the brand.

“Ever since Solane changed their branding from Shellane back in 2012, people kept calling me Solane or saying si Solenn ang dating Shellane,” she recalled in between laughs. “When I found out about the offer, I thought, finally!”

Meanwhile, Isla LPG, the company behind Solane, is just as happy to have Heussaff onboard.

“We’re so excited to have Solenn be a part of the Solane family. She brings in so much passion, talent, and wit, and we can all relate to her one way or another as a parent, a homeowner, or even as a home cook, ” Valeri Villano, Marketing Manager of Isla LPG, expressed.

“Solenn simply nails the different roles she takes in life, especially that of being a wife and mom, so she’s just perfect for Solane LPG,” she remarked.

An actress, painter, and make up artist by profession, multi-talented Heussaff is also known to her fans as a hands-on mom to Thylane Bolzico and a loving wife to Argentine entrepreneur Nico Bolzico. And with Solane’s commitment to protect families with safe and secure kitchen fuel, Heussaff is proud to represent the country’s most trusted LPG.

“My top priority in life is to take care of the people I love. Their safety means the world to me and I will always make choices that protect that,” she shared. “I know with Solane I will not have to deal with accidents, and I can enjoy sharing moments with my family without having to think of leaks.”

Heussaff also attributes her love for cooking as a reason why she couldn’t say no to Solane. In her own kitchen, she enjoys experimenting and discovering new ways to use ingredients – even sharing her own recipes on Instagram. And as a new mom, she finds cooking as a great way to bond with her daughter who, at one year old, already enjoys observing and helping in the kitchen.

“Food brings people together. It helps you get to know people more, and if there is anything we learned this [past] year, it is to value the people that surround us,” she said.

Meanwhile, Heussaff’s relationship with husband Bolzico is one that many adore. The celebrity couple constantly shares snippets of their life on Instagram – videos of them pranking each other and just recently, about how they both forgot their anniversary – showing that they are just like every other couple and proving that Heussaff is undeniably hilarious. No wonder so many people look up to the famous Wifezilla, including the Brand Manager of Solane, Charen Natal.

“As a celebrity, Solenn’s natural charm is hard to ignore, so each time the idea of getting a new brand ambassador is discussed, we thought, It’s gotta be Solenn!”

With a funny bone and the perfect name to boot, Heussaff reveals that she already has a ton of funny videos in mind for Solane – which everyone should definitely look forward to. So keep an eye out this June and follow Solane LPG’s social medial pages (Facebook. Instagram, and Youtube) and Heussaff on Instagram so you don’t miss out!

Party, Play, Panalo Everyday! Here’s why we can’t wait for the GCash GBirthday happening this October 18-22!

The Heat Never Felt So Cool with UNIQLO AIRism