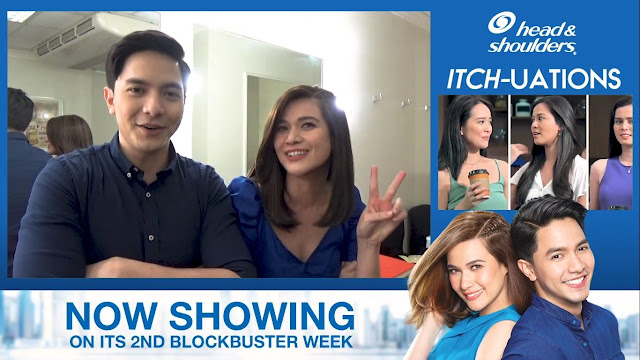 Staying at home for months has had us bawl and cry our hearts out over a number of love teams in the numerous romcoms and dramas we’ve binged over the quarantine. But with the current situation, there has been a lack of local films as our favorite OTPs are on hiatus in the big screen. Like their dramas, the lack of local romcoms has been heart breaking, gut-wrenching, and has left us craving the kilig.

But that didn’t stop Head & Shoulders from serving us with the electrifying on-screen chemistry of Alden Richards and Bea Alonzo. With their new endorsement and the release of their advertisement, Bea and Alden gave us all the kilig we’ve been wanting to feel and that made them undeniably one of the biggest love teams to date!

The comments sections of their Compliment Wars and First Impressions videos blew up with fans raving and requesting for a movie team-up. While we’re not able to enjoy a big screen release with Bea and Alden as a love team yet, we actually get to see them test their chemistry with a short “itch not you” skit. We don’t want to spill all the beans for you, but Alden had a valid reason why ‘itch not Bea.’

Itch Not You, Itch a Challenge

Ignite the inner Bea or Alden within you and get a chance to win 1-year supply of Head & Shoulders products and the Oh! Scratch package!

Just duet with Andrea Brillantes or Kyle Echarri’s #ItchNotYou TikTok video and post it on your TikTok or Twitter with the hashtag #ItchNotYou. Kyle and Andrea will be choosing the 6 lucky winners of 1-year supply of Head & Shoulders products. Entries are valid until December 16. Duet now for more chances of itch-free moments.

You might just find your Alden or Bea and experience kilig that’s dandruff-free and itch-free. Save yourself from itch-uations when you use Head & Shoulders!

From salt-powered lamps to the legendary karaoke machine, stories of Filipino ingenuity andcreativity have always inspired us, as well as people all over the world. Now, we take a look at
the latest among our countrymen to be recognized on the international stage for his brilliance.Last September, Elmer Padilla made headlines when his handmade action figures, made of recycled tsinelas, were posted on Facebook. He has since made an appearance on Kapuso Mo,Jessica Soho, and his work was even handed to Thor: Ragnarok actors Chris Hemsworth and Mark Ruffalo, who praised Elmer’s depictions of their characters. Sinubukan ko na po gumaya ng mga action figures. (I was nine years old when I started making these. At the time, I didn’t make characters. I just made boats out of broken flip-flops until I was
able to make robots of my own imagination. Then, I began taking an interest in action figures from movies. At that point, I tried imitating action figures.),” he said. Originally hailing from Samar, Elmer, his wife, and two daughters recently moved to Imus, Cavite to try and fulfill his dream of making and selling action figures. It was here that he was discovered selling his tsinelas action figures on the streets, and from there, his fame skyrocketed. Elmer’s primary expense in making his action figures has been the purchase of MIGHTY BOND.Sometimes, when he runs out of money, he’d just buy ordinary shoe glue, but this lowers the quality of his work. “Kapag ordinaryong shoe glue lang talaga, madaling matanggal ang dikit kapag natutuyo na. Kapag MIGHTY BOND ang gamit ko, mabilis dumikit at matibay kahit na yung sa mga parte pa ng action figures na mahirap dumikit gaya nung mga wires at plastic. (When I use just ordinary shoe glue, the stickiness easily fades when it dries. When I use MIGHTY BOND, it sticks quickly and it stays sturdy, even with the parts of the action figures that are hard to glue like wires and plastic.),” he said. Right now, Elmer’s income from his craft remains a little slow, as it’s just him working on fulfilling the orders. Already, though, he’s being courted by international flip-flop brands hoping to become his supplier. And in the coming days, he’s going to personally hand action figures to President Duterte and President Trump, during the ASEAN Summit. In spite of rising fame and fortune, Elmer’s dreams remain squarely grounded at home. He wants to be able to buy a house for his family, and buy whatever they need. With all the hard work he puts in for his family, he truly is as good as the superheroes he depicts.